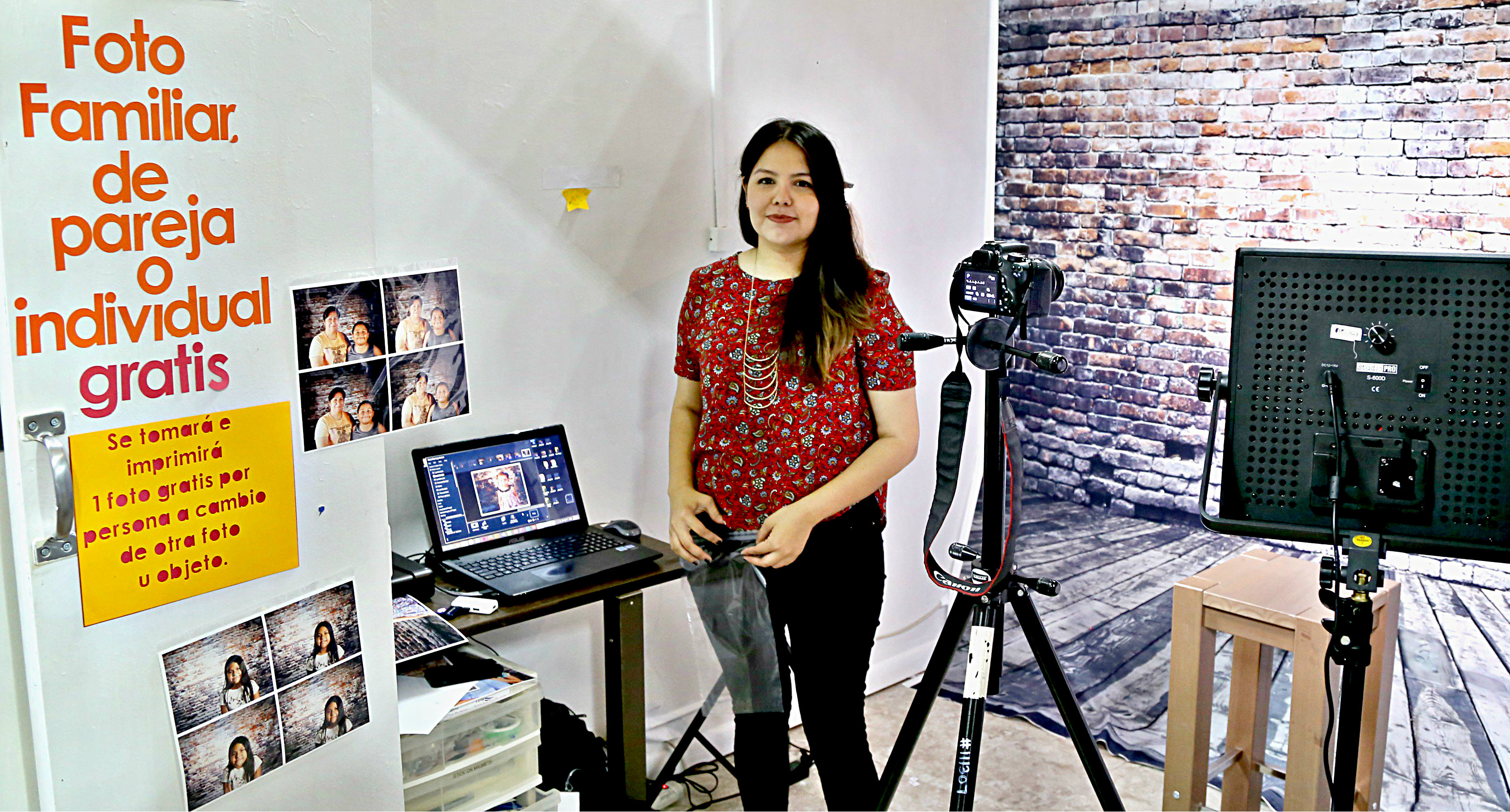 In 2017, experts predict we’ll use our smartphones to capture more than a hundred billion photos. But  how often do we ever really look at them? In This week’s Artist Spotlight,  I headed to a popular Latino marketplace where one artist is trying to create images that endure in order to share a more detailed portrait of the North Texas immigrant population.

The Plaza Latina bazaar is a quirky little shopping center in North Dallas. It’s the size of a large grocery store. And it’s the sort of place where you can pick up hard-to-find Mexican candies, piñatas and gorgeous gowns for quinceañeras. You can also get your eyebrows threaded, buy a car stereo and even pick up a new friend at the pet store. 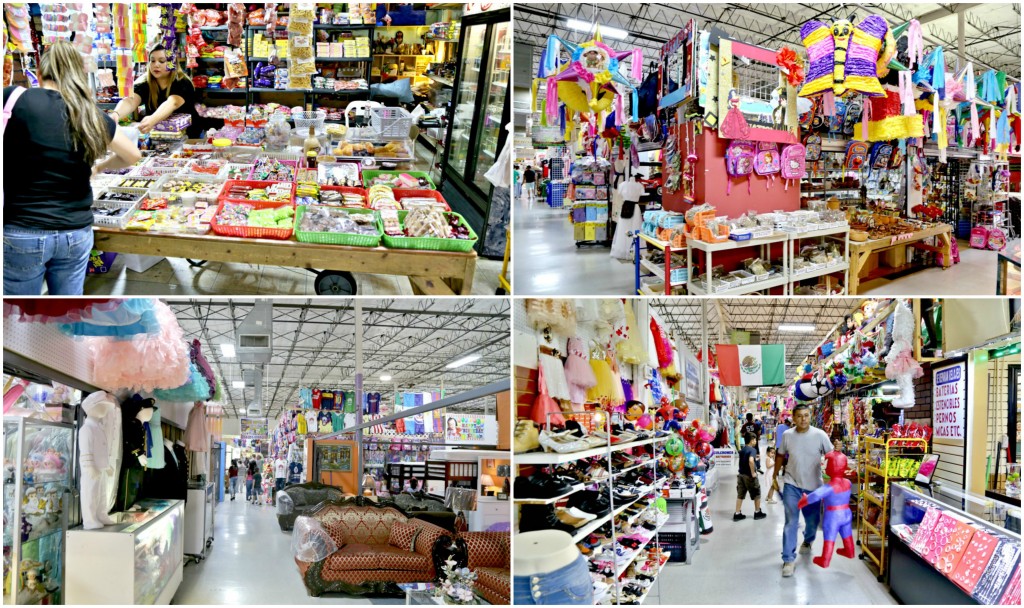 Photos of some of the booths inside Plaza Latina. Photo: Hady Mawajdeh

During August though, the Plaza Latina was home to an art project. The endeavor was spearheaded by 29-year-old Marcela Reyes.

“I have been here since August 5th,” Reyes explains. “I’m giving away free photos to people. It has been great! Really busy.”

Reyes is a multimedia artist who lives in Garland. She’s pursuing her MFA at UT-Arlington.

“Yea. It’s a little bit hard because, you know, from my house to Arlington, it’s an hour,” Reyes says. “But I’m happy. I wouldn’t change that.” 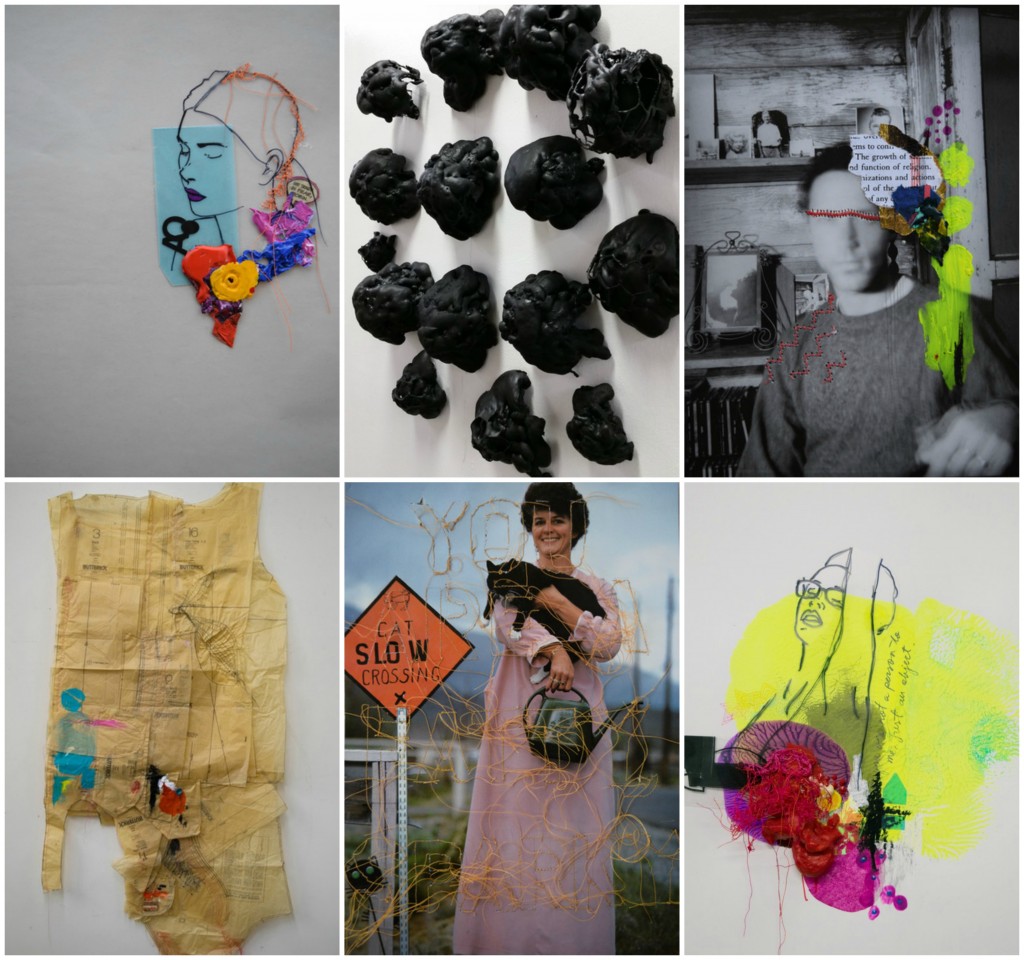 Usually, Reyes draws, paints and uses found objects to make her work. But this spring she won a grant from the Nasher Sculpture Center and she’s spent the money to set up a portrait studio at the bazaar.

Her space is small. It’s about the size of an office cubicle. And at least a dozen people are in line for a photo.

Reyes is providing these families free, high-quality prints that she hopes they’ll treasure. But she’s not only providing these folks with free portraits. She also plans to exhibit the photos. She wants to highlight the Latino immigrant experience, especially the experience of undocumented people. For her, it’s personal.

“You know when I moved here, I was undocumented,” says Reyes.  “So to me, it’s still a big part of me, and I feel like now that I’m able to, I need to talk more about the issues because sometimes they can’t.” 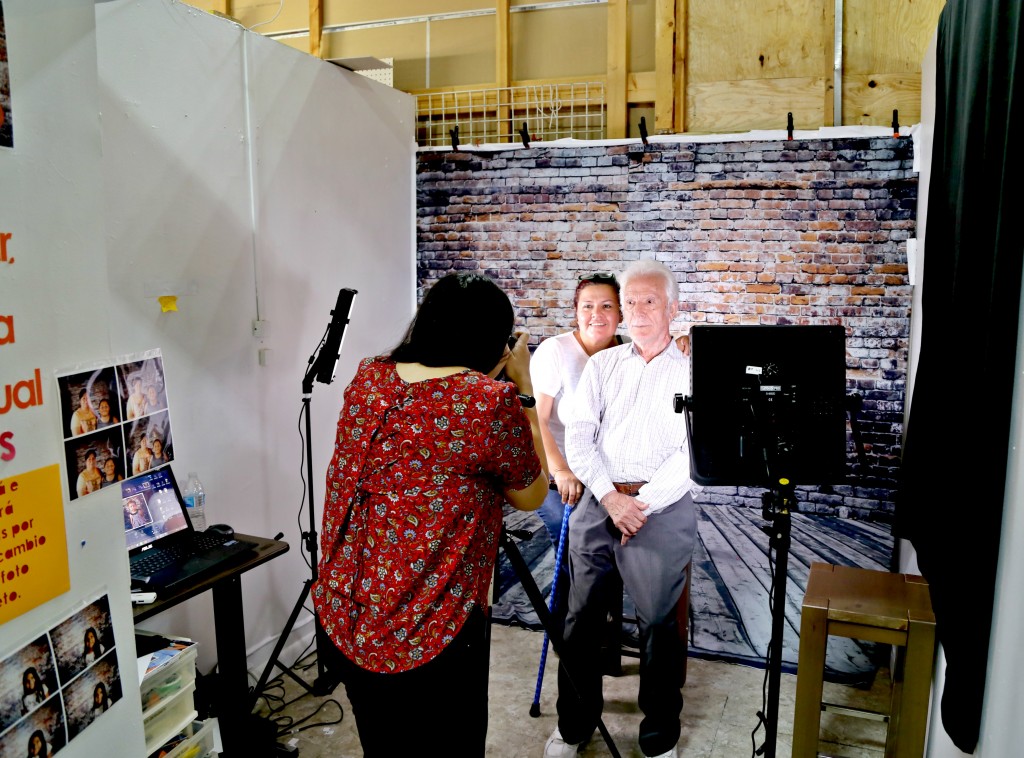 Reyes’ family immigrated to North Texas 15 years ago from Monterrey. She was 14 and didn’t want to come to America, but the violence in her home state was wreaking havoc. Unfortunately, the U.S. wasn’t completely safe either, so she felt she had to make herself invisible.

Reyes is a citizen now, but talk of a border wall and attempts to undo Deferred Action for Childhood Arrivals, or DACA, remind her of what’s at stake.

“Again, I was really angry about it, because I started thinking about people I know that are undocumented and who are afraid,” Reyes says. “And all those feelings came back, like ‘what are they going to do?’ ‘What’s going to happen?’” 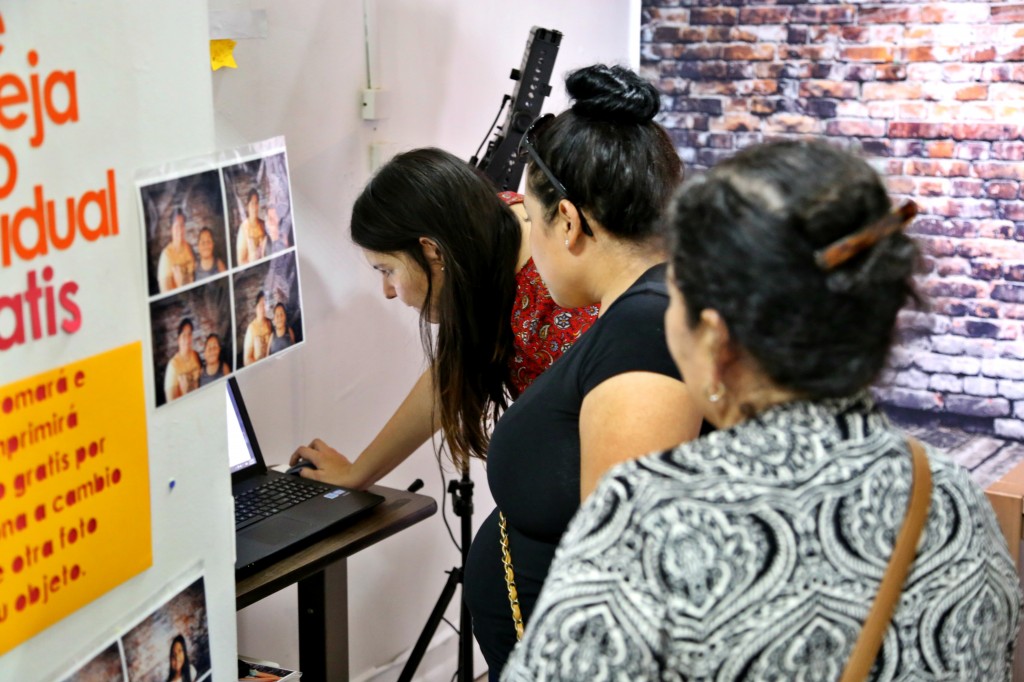 Back at the bazaar, Reyes is still busy photographing people. She’s taken portraits of children, families and even couples. All of them seem thrilled to be taking a photo home today.

Alma Guzman is a regular at Latina Plaza. She and her mother stumbled upon Reyes’ photo studio by accident. They jumped at the opportunity for a free photo.

“Nowadays, people are always trying to take selfies or photos with their phone, but it’s nice to get your photo taken with a professional,” says Guzman. 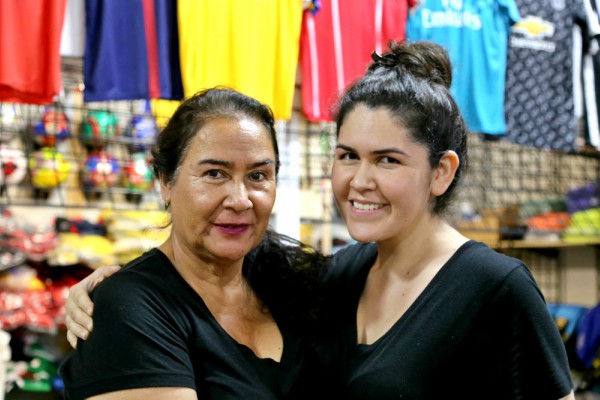 Jose Pineda agrees. The 37-year-old property manager from Honduras says all of his family photos are on his phone. He’s delighted about this opportunity for a photo.

“Yes, of course, it’s something to remember,” Pineda says. “A photo like this, you take care of it, you put it on a wall. For your kids.”

Pineda says he’ll cherish the two portraits with his son.

Reyes is still thinking through how she might exhibit these portraits. She does know one thing: It’s important that the people in them will be seen. 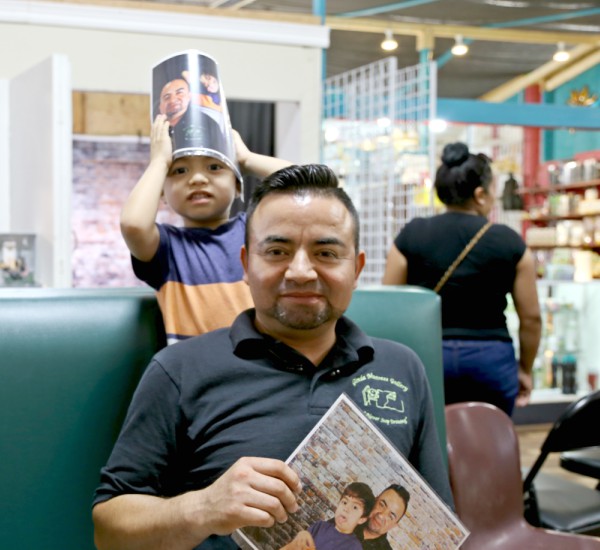 Jose Pineda and his son say they’re happy about the photos Reyes has taken of them. Photo: Hady Mawajdeh

How does living in North Texas affect the production of your art?

Sometimes I create artworks that are small. I can put small little objects that I’ve found together or work on some paintings that are just for me. I don’t really share that art. That’s sort of my escape. But the work that I do show tends to be about immigration, feminism or the Hispanic community. All of those things are tied to me and my life in North Texas.

I’ve lived here since I was 14 years old. My family emigrated from Monterey, Mexico. And this is my home now. This is where I studied art – in high school, at University of Texas – Dallas and now at the University of Texas-Arlington. So, yeah.

Also, the Hispanic community is so large here. And it’s my community. So I guess my surroundings and upbringing affect the work I create.

Does Garland have an arts scene?

There is not much of a scene. Recently, I have been looking into the arts center and there’s not much going on. They might have some small arts classes, but you have to pay for them and not everyone can afford them. So it’s lacking. I think there are some parts of the city that are trying to do better. There are social projects that involve some art, but I really hope that it can be brought up . . . because there’s really nothing. 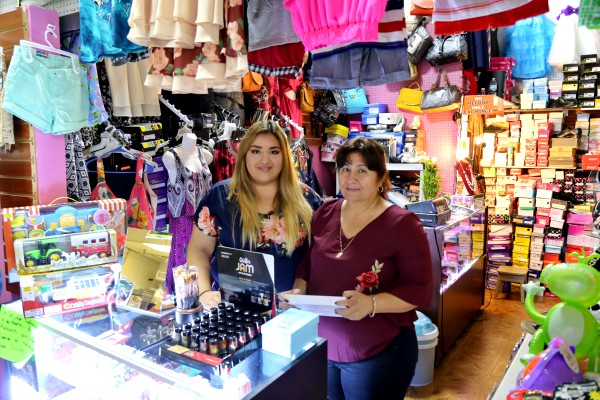 Valeria Telles and her family have a booth at Plaza Latina. They took portraits with Reyes. Photo: Hady Mawajdeh

English is your second language and you’re an artist who is currently making work about Hispanic and Latino people. Has it been hard to find people to collaborate with or to discuss your work with?

Even though I’ve grown up here, a lot of people don’t see art as realistic possibility for my future – even my family – so it can be hard to be the only one. But now that I am attending UT-Arlington for my MFA, I’ve learned that there is a big Hispanic community in the arts. And I really like seeing that there is more and more happening and more Hispanic artists working to tell their story.

Is being an artist isolating?

It is, but I like the isolation (laughs). I think that I can think better and do better work when I am alone. But sometimes you do feel left out or that other people don’t understand what’s going on with you or your work or the politics.

You know I was just reading an article recently that said something like, ‘all art is about gender and race now.’ And the guy who wrote the piece was saying that artwork didn’t used to get tied up in that stuff before. He says that that’s what everyone is talking about now. And it kind of made me angry because I didn’t think he understood why people (like me) are creating work about this now. Anyway, sometimes it can be isolating making art about those topics, because other people don’t understand you. 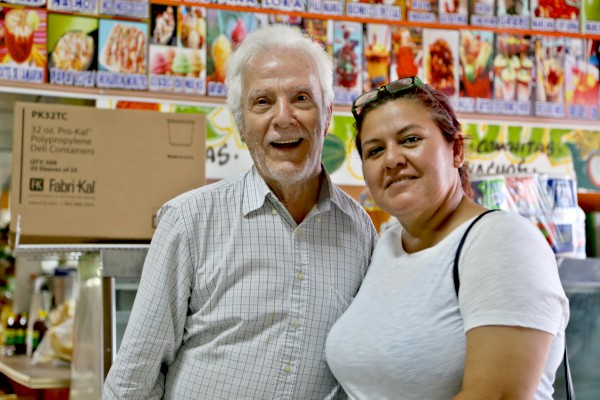 Cecilia Trevino and her father were eating fruit cups when they learned about Reyes. They’re excited to take a photo. Photo: Hady Mawajdeh

Your recent project “Intercambio” did two things. It provided a service: “free portraits for individuals from Latin countries who visited the bazaar.” But you also said you wanted it to open people’s eyes to families and connections Latin and Hispanic people have to North Texas. Can you open eyes when you’re showing the work in spaces occupied by Latin and Hispanic populations?

I hear what you’re saying and I get the question. You’re saying that for me to open eyes I have to bring my photographs to people that aren’t inside the bazaar. I get that. But I am still not sure that I want this project to be for everyone. It’s not like I don’t want others to see it, I do. But I am still trying to determine what sort of gallery is the right one for this work.

I have these photos of families and I want to respect them. The photos were shown at the bazaar, but maybe they’ll be at Latino Cultural Center or the Oak Cliff Cultural Center in the future.

How do you maintain balance?

I work for my family’s business and that gives me flexible hours for school. It’s not exciting, but it’s really nice to have a job with my family that works with my schedule. But how do I maintain balance? I don’t know (laughs). I have everything scheduled. So I try to wake up early every day, go to school and work. I have a studio on campus, so I spend a lot of time there. That’s how I can stay focused and keep my mind on my studio work.

It’s all really hard, but I am happy. I am making art. I am going to school. And I have a job. I wouldn’t change anything.

When did you start calling yourself an artist?

Honestly, I still have a hard time with that. I generally tell people that I make art. I’ll also tell them that I make multimedia work. But I have a hard time telling people I am an artist. I’m not really sure why it’s hard, but I think it has something to do with the idea of what’s defined as art.

Plus, I have always thought of people calling themselves artist as arrogant. I don’t know why . . . .

Are you an artist?

(Pause) Yes. But it’s the hardest thing for me to say. 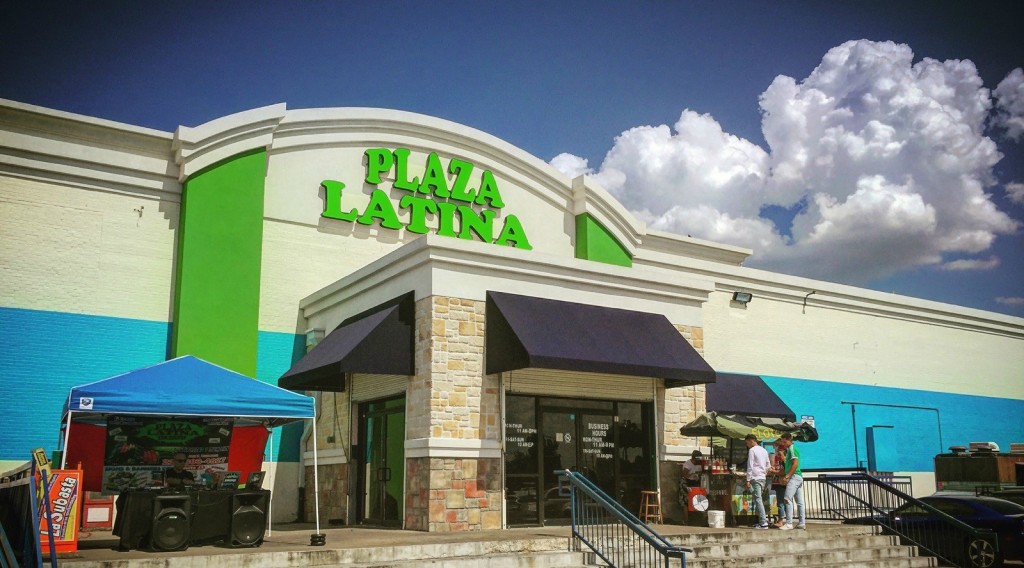 I do wish that I was doing more. But I know that I set impossibly high standards for myself and if I am not able to reach them, I get really bothered. Anyway, overall I think things are great right now.

What’s been your biggest sacrifice in pursuit of art?

I think that sort of sacrifice fine right now. I know it’s a little bit selfish, but I think it’s time for me to be selfish. It allows me to work on myself and my work.

What makes you different or special as an artist?

(Laughs) I don’t think I have an answer for that. I don’t want to sound arrogant and I don’t think there’s anything that makes me better than anyone else.

I would say that my new work is targeted toward the Hispanic community and I don’t see many people doing that. And I would like to do more and more of that because I want them to see more art in their lives. But I cannot think of anything that makes me “special.”