In 2004, South Dallas rapper Big Tuck released a song that quickly became one of the city’s most enduring and beloved hip hop anthems. 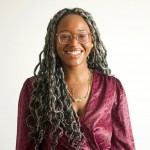 “I think Tuck really put a seat at the table for us,” Crumpton says. “I think everyone who is popular now: Yella Beezy, Trapboy Freddy, the late Mo3. They were able to kind of stand on Tuck’s shoulder to get that national success.”

Crumpton explores the legacy of Big Tuck’s “Purple Hulk” in a new book. She was one of five writers selected by Shea Serrano, the New York Times bestselling author and Texas native, to write about a single hip hop album.

The selected works include blockbuster albums like Lil’ Kim’s “Hard Core” and Kendrick Lamar’s “To Pimp A Butterfly.” While “Purple Hulk” may not have reached the level of widespread success those records did, Crumpton says Big Tuck’s debut still left a lasting impact on hip hop.

She spoke to KERA about the album and her new book.

Perez: Let’s start with Big Tuck. What space does he inhabit in Dallas hip hop lore?

Crumpton: In the beginnings of hip hop in Dallas, so many Southern rappers were trying to emulate East Coast especially. So, when we think about those early records, like Nemesis. You hear like a New York kind of inspired flow. Then, you have The D.O.C., who famously migrated to Los Angeles and was very reflective of the gangster rap sound.

When Tuck came on the scene with Dirty South Rydaz, it really was that first moment where we had a rapper not trying to emulate another coast sound or region or delivery. I just think he felt so authentically Dallas. That’s probably what has immortalized him as the city’s champion. You hear him and you hear yourself. You hear us.

Perez: Let’s talk about “Southside Da Realist.” It is this ode to South Dallas, and it is beloved by hip hop fans. Tell me about this song’s history, its legacy, and the moment that Big Tuck was capturing here.

Crumpton: “Southside Da Realist” is a gangster rap anthem in the purest notion of what the beginnings of gangster rap was back in the day. When we think about how it was an arch of narrative storytelling because, if you read the lyrics and you get in your car, you can literally drive around Dallas and you have an image, a focal point of what was happening in the song in that direct era.

PEREZ: “Southside” is obviously the crown jewel of the album, but what are some of the other highlights for you?

Crumpton: My beloved song on it is “Tussle.” I laugh because I can think about the amount of times where I have been with friends just shouting the lyrics.

One of my friends, Brooklyn White, is an editor at Essence. She writes about how Black women, a lot of times, singers aren’t able to express their anger and their rage just because of like societal perceptions of a Black woman being aggressive.

Read Brooklyn White’s series on “The Importance On Black Women’s Rage in Music.”

For me, “Tussle” is that one song where if I need to get that out of my system, if I am angry with the world, if I’m angry with society in general, I can put on “Tussle.” I am belligerent. I am pulling my hair. I’m pulling at my clothes. I’m shouting, yelling, and screaming. By the end of it, it’s better than the best therapy session I’ve ever had.

Perez: “Purple Hulk” also sounds like an album that’s meant to be heard in community, like should-to-shoulder at a club. Dallas has a rich history when it comes to dance in hip hop. Tell me about the city’s Boogie era.

Crumpton: In NPR’s Southern hip hop project, I wrote about one of those boogie anthems. It was Lil Wil’s “My Dougie,” which is like the infamous Dallas versus L.A. tension around how L.A. took The Dougie. The dance became so popular that ESPN called 2010 the “Year of the Dougie.”

Dallas has always had a rich b-boy and hip hop dancing community. There’s this fantastic documentary called “We from Dallas” that does a good job with analyzing how influential the city’s dance culture is in hip hop culture.

We’ve always had dancers on Soul Train or performing in competitions. It was that time where social media was just starting to like, get it’s for earnings. It wasn’t the capitalist giants that we have today. You just went on there and you performed. And, social media just blew it up outside of our sister cities. Out of Shreveport and New Orleans and Arkansas and Oklahoma City. This familiar thing went worldwide. You can still see in like popular dances today. I think about like 10K Cash from Dallas on Tik Tok becoming popular from dancing. Obviously, he grew up during like the boogie movement based on his age. We see that a lot of these young rappers who are from the Texas. Their dances draw from the boogie movement. It’s just like this continuous development.

Perez: You’ve written a lot about Dallas and how it lives in the shadow of Houston. Tell me more about that dynamic and what you think is missing for the city to get its due?

Crumpton: So, Dallas had always been a market for distribution. We’ve always been a market for producers. So, we’ve been in the music industry behind the scenes, and Houston had an existing infrastructure from like their music industry, pre-hip hop. They had a local distributor, they had record companies. They already had that capital to help get that attention. So, it was kind of like we were a little step behind.

I was talking to George Lopez of T-Town Music, the mastermind behind Dirty South Rydaz. What he did with T-Town Music very much linked Dallas to the rise of third coast hip hop, which is also known as Southern hip hop, in the late ’90s, early 2000s. His store was where people in Dallas could listen to music from Houston, from New Orleans, from these Southern capital cities.

Houston actually really did help Big Tuck on “Purple Hulk” because you see that Chamillionaire is on there. If you look at their earlier mixtapes, a lot of members of Dirty South Rydaz were on the Swishahouse mix tapes.

So, in being that underdog city, Dallas got to foster so much imagination and creativity and innovation because you don’t always have the eyes of the big record companies looking at you.

There’s multiple different spheres of hip hop from alternative to gangster, to mainstream, to underground, to indie. We have all of the flavors here, and I hope that the national music industry will look at that and really want to give the needed infrastructure support and not predatory deals. The reason why we don’t have so many OGs today is that in the late ’80s, early ’90s, they were in these destructive record deals that really limited their autonomy and creativity. For artists, that’s the worst thing you can do.

Perez: You’ve had a whirlwind year. Apart from your new book, you’ve had bylines in Harper’s Bazaar and The Washington Post. How’s 2020 been for you?

Crumpton: It has been a wild year this far. I started the year as a social worker for homeless youth in the Bay Area. Now I’m ending the year as a full-time freelancer, culture critic and writer. I think that is a great evolution of really taking a leap of faith during a pandemic and trusting in yourself, along with the familiar support that I’ve got. A lot of friends and family and peers on social media.

I think even with this project specifically, I had such a struggle because at the time of Tuck’s album, there wasn’t a lot of coverage of it locally. They only got national coverage until after T-Town Music got their deal. I had to interview the few people who had written about them. Zac Crain, who was the former music critic at the Dallas Observer, now at D magazine, George Lopez of T-Town Music, Pikahsso, who runs the DFW Hip Hop History Facebook page. So much of the book is really quotes from interviews with them because they were the only people at that current period in time who were present for the history.