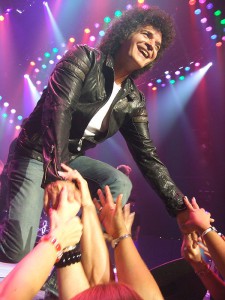 A brand-new performance from the legendary Gino Vannelli premieres tonight on KERA TV!

Ahead of his concert on Sept. 6 at the Eisemann Center in Richardson, check out Gino and his band performing his memorable hit songs, along with other classics. Performed at the historic Saban Theater in Los Angeles, the program features Gino and his band playing at their very best.

Receiving rave reviews, the concert offers a front-row seat to a man whose voice and songs are loved by fans all over the world. Gino Vannelli is the recipient of multiple Juno awards and Grammy nominations, and he has sold more than 10 million records worldwide.

” Gino Vannelli: Live in L.A.” premieres tonight at 8:30 on KERA TV. Tune in for tickets to Gino’s upcoming performance in Richardson!